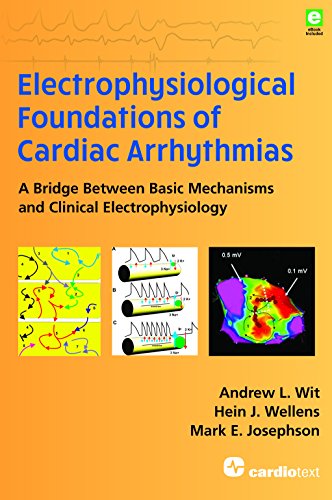 This book teaches the fundamental concepts of cardiac electrophysiology with an emphasis on the relationship of basic mechanisms to clinical arrhythmias. Understanding this relationship and the underlying mechanisms of arrhythmogenesis will be valuable to medical students in general and physicians entering the fields of cardiology and clinical electrophysiology, as well as those scientists and clinicians already working in this field.

The book is divided into three parts that cover the major mechanisms of arrhythmogenesis: Part I Automaticity, Part II Afterdepolarizations and Triggered Activity, and Part III Abnormal Impulse Conduction and Reentry. Each part starts with a chapter that describes the basic science principles related to that particular mechanism. Topics include: impulse initiation and rate control, membrane currents, conduction, and the effects of programmed electrical stimulation and pharmacologic agents. Subsequent chapters in each part are organized around examples of clinical arrhythmias and then focus on the relevant EP mechanisms and the characteristic responses to interventions. The characteristics of the three different mechanisms are compared and contrasted throughout the text.

I read Electrophysiological Foundations of Cardiac Arrhythmias, written by three icons of cardiac electrophysiology with great joy. This is an amazingly comprehensive text, written so that students of all ability level can understand the basic mechanisms of cardiac electrophysiology. My friend Mark Josephson often complained that contemporary electrophysiology had become electrotechnology. Physicians had become so concerned with doing things (implanting ICDs, performing ablations) that the underlying understanding of what they were doing was often missed. This text provides a powerful antidote to electrotechnology, appropriate for all true students of electrophysiology. –David J. Callans, MD; University of Pennsylvania Health System Philadelphia, Pennsylvania

It is fair to say that this textbook is a gem, and one every electrophysiologist should want to have. It is one of the last masterpieces that Mark Josephson contributed to with his friends and life-long colleagues, Hein J. Wellens and Andrew L. Wit. It reflects their unique perspective on the integration of basic science into an understanding of human clinical electrophysiology. We are talking about bench to bedside, and this fine volume includes some of the best basic and clinical science I have read anywhere. The book is an essential addition to every electrophysiologist s library. –Kenneth A. Ellenbogen, MD; VCU School of Medicine Richmond, Virginia