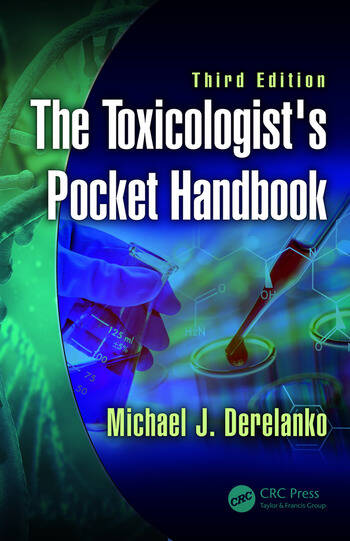 The third edition of the Toxicologist’s Pocket Handbook, like the first two editions, is a scaled-down version of the best-selling Handbook of Toxicology. It provides the most frequently used toxicology reference information in a convenient pocket-sized book. The format remains the same as the earlier editions to allow basic reference information to be located quickly, with the information placed in sections specific to subspecialties of toxicology. A detailed table of contents lists all tables and figures contained in the book by section. This expanded edition contains a number of tables not found in the second edition added to sections on lab animals, general toxicology, dermal and ocular toxicology, genetic toxicology/carcinogenesis, neurotoxicology, immunotoxicology, reproductive/developmental toxicology, industrial chemical, and pharmaceutical toxicology. New information is presented for additional laboratory animals such as swine and primates, infusion recommendations, newer methods such as the local lymph node assay, and reference safety pharmacology values for standard species. Additional information on typical genetic toxicology and immunotoxicology assays as well as in vitro assays for eye irritation are provided. Some tables from the second edition have been updated to include new information that has arisen since the earlier edition went to press. Information from the second edition, such as regulatory requirements that are no longer applicable, has been deleted.

Michael J. Derelanko, Ph.D., D.A.B.T., F.A.T.S., has spent most of his career as a toxicologist in the pharmaceutical and chemical industries. Dr. Derelanko received a B.S. degree from Saint Peter’s University (formerly Saint Peter’s College). He was a National Institutes of Health predoctoral trainee in the Albert S. Gordon Laboratory of Experimental Hematology at New York University, achieving M.S. and Ph.D. degrees. He received the New York University Gladys Mateyko Award for Excellence in Biology. Following a two-year postdoctoral fellowship in gastrointestinal pharmacology at Schering-Plough Corporation, he began his career in industrial toxicology as a research toxicologist in the laboratories of Allied Chemical Corporation in Morristown New Jersey which eventually became AlliedSignal and later Honeywell International. Over a 20 year period, Dr. Derelanko held various positions of increasing responsibility becoming Corporate Manager of Toxicology and Risk Assessment. He most recently was Director of Nonclinical Drug Safety Assessment for Adolor Corporation in Exton, Pennsylvania where he contributed to the discovery and development of novel drugs for nearly 10 years.

The Wiley Handbook on the Psychology of Violence (2016) (PDF) Carlos A. Cuevas